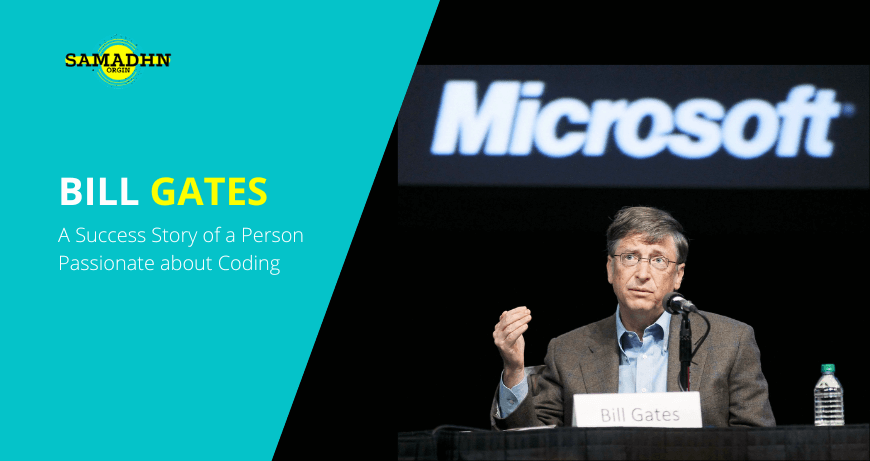 We all know working with passion and enthusiasm on a thing can take us far and wide in life. If you have sheer passion and knowledge regarding something, no one can stop you from achieving greater heights in life and conquering the world. Such a passionate story is of Bill Gates- the founder of Microsoft operating system. His story is not from becoming poor to rich as he was belonging to a well-to-do family. Instead, his story is of extreme passion, hard work, and achievements.

Bill Gates was born on October 28, 1955, to father Willaim Gates and Mother, Mary Maxwell Gates. His father was a lawyer and also wanted him to be a lawyer. But Bill Gates was passionate about computers and programming. So when at the age of 13, Gates was admitted to Lakeside school he started to work on his passion. The teachers of the school also allowed Gates to pursue his passion. They also got him a computer from the Electric Computer Company to follow his fondness.

Gates worked with his friend Paul Allens to learn programming languages and find bugs. They played with codes and created codes for different programs. Gates wrote his first code for the game tic-tac-toe. Later, Gates and his friend Allen created their first program for payroll. Later they built another software for managing traffic. This traffic software was the first software that Gates sold at 15 for $ 20,000. No one knew that this was the start of Gates and Allen into the world of software.

After getting acquainted with the issue of Popular electronics in 1975, Gates decided to collaborate with them. With the same view, Gates contacted the Micro instrumentation and telemetry system (MITS) and informed them that His team was working on the Basic interpreter for the platform. After seeing the interest of MITS, Gates, along with his friend Allen created an Altair emulator within a week. This Altair emulator could work on a minicomputer and the Basic interpreter.

Gates and Allen demonstrated this Altair emulator to the MITS team at the headquarters of MITS in Albuquerque, Mexico. The demonstration was successful, and MITS and Gates finalized the deal. MITS hired Allen, and Gate took leave from Havard to work with Allen. Allen named this new creation as Micro-soft ( with Hyphen). He derived the name Microsoft from microcomputers and software. After that, Gates never went back to Havard to complete his studies.

In 1976, somehow, Gates noticed that the pre-market copy of Altair was leaked, and many Hobbyists were using the software without paying for it to Microsoft. He then wrote an open letter to Hobbyists about the issue. After noticing no changes in the situation, In late 1976, Microsoft separated from MITS.

Independent Microsoft kept creating software for various systems. Then, in 1979, they shifted company headquarters from Albuquerque to Bellevue, Washington. In the first five years of the company, Gates used to review and make necessary modifications to each code produced by the company. Later as the company expanded, he shifted to the role of Manager and later to the executive position.

The Journey from Small Business to World Recognized Enterprise

It was in the year 1980 when IBM, the leading computer equipment developer, approached Microsoft to develop software for their upcoming personal computer. Gates and Allen together developed an operating system, 86 DOS. The deal was finalized, and they delivered it to IBM for the one-time fee of $50,000. This amount of $50,000 was quite small, but it brought a lot of prestige to Microsoft. This prestige became the turning point for Microsoft, from small software developers to large-scale leading software developers worldwide. Soon everyone recognized the name behind the software in IBM PC, and now it was the time for Microsoft to convert to a larger firm.

Microsoft was reconstructed, and Bill Gates became the president and Chairman of the board on June 25, 1981. After becoming successful, Gates and Allen donated millions to their childhood school, Lakeside.

In 1985, Microsoft launched its first retail version of Microsoft Windows in the market. After that, various updated versions were launched year after year. From the company’s founding to 2006, Gates took all the responsibility for Microsoft’s product strategies. In 2006, He stepped down from his CEO role at Microsoft to give more time to Philanthropy.

Bill Gates earned a lot of money and also helped people around him with his wealth. This charity and donation work makes him a humble person. He stepped down from the CEO position and invested his time in the Williams foundation. He works with his wife towards humanity, poverty, healthcare, inequality, hygiene, and many other societal issues.

Final words on the Story of Bill Gates

They say do it with passion or not at all. Bill Gates followed his passion and kept working on it and growing it each day until he became the richest person in the world. In 1976, though, he faced some financial losses due to the leaking of codes of his software. Nevertheless, Gates didn’t give up on his passion for creating software. Instead, he kept up with his skills and knowledge, bringing him far in life.