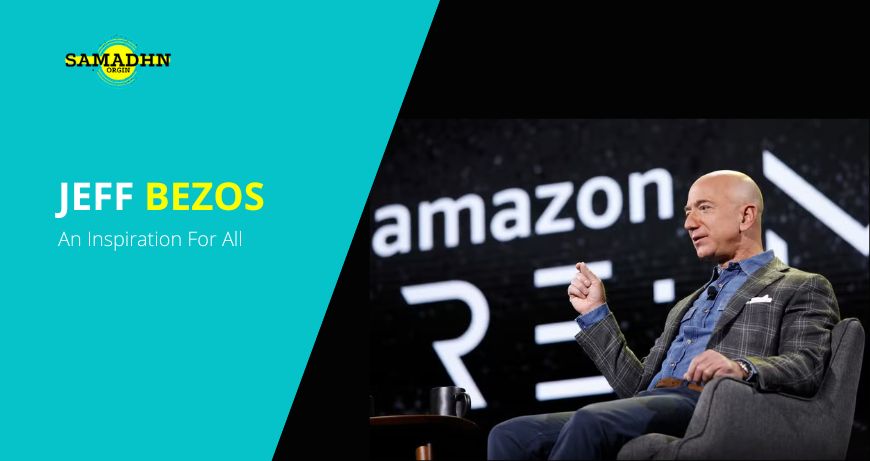 Jeffery Preston Bezos, commonly known as Jeff Bezos, is the entrepreneur and founder of the top-rated online shopping site Amazon. Besides this, he is the firm’s chairman and former president. He was the wealthiest person in the world from 2017 to 2021, owing to his entrepreneurship and investments.

The owner of the giant e-commerce site, Jeff Bezos, was born in the year 1964 on January 12 in Mexico. He was the first son of 17-year-old high school girl Jacklyn, and 19 year-old Theodore Jørgensen. Jeff attained early Montessori school in Albuquerque, Mexico. After his parents’ divorce, his mother married Mike Bezos, where he got Bezos’s surname.

Jeffrey did high school in Florida, where he used to do a part-time job at McDonald’s. He was good at studies and was a National Merit scholar, and he also received Silver Knight Award in 1982. He later completed his Bachelor of Science in engineering in electrical engineering and computer science from Florida itself.

After graduation, Jeff started searching for jobs like all other students, and he worked with several big names such as Intel, Bell Lab, and Anderson consulting. Then, in late 1993, Jeff Bezos decided to establish an online bookstore after learning about the internet and its great growing speed.

Later in the year 1993, Jeff  Bezos, along with his wife  Mackenzie, left their jobs and established Amazon in Washington in a rented apartment. Initially, he named his Company Cadabra. After some time, he changed the name to Amazon. There is a significant reason why he selected this name.

Jeff Bezos started this bookstore with the investment from his parents and other investors of rupees $300000. He did a very crucial thing that every entrepreneur must follow. He warned all his early investors that there was a high chance, about 70%, that Amazon may fail or even go bankrupt. However, Jeff Bezos had bigger plans to expand his online bookstore to other products.

Within three years of starting Amazon, he listed it as public. Later in the year 1998, he expanded Amazon to online sales of music and video. In the same year, he also included other consumer goods on his website. This was when Bezos put in a lot of investments in Amazon. He also had to borrow some amount from the bank. Later, in 2002, Bezos also started launching web series on Amazon.

At the end of 2012, Amazon faced its biggest setback due to high spending and lack of revenue. It was a time of financial distress, and Amazon almost went bankrupt. Due to severe financial problems, Amazon closed its distribution center. To further recover the losses, Amazon also had to give off its 14% workforce.

But as we say, nothing lasts forever; this bad Time of Jeff Bezos also didn’t last long. In 2013 Jeffbezos overcame the setback of Amazon with a bang. He overcame financial instability and earned a profit of almost $400 Million in the same year.

After overcoming the losses, Jeff Bezos never looked back. He kept growing Amazon and adding new products to his e-commerce site. The main reason for him to keep growing as he used to bring up a new idea each time that wasn’t introduced by anyone. Same why He came up with Amazon Kindle in the year 2007.

Amazon Kindle is the device that allows users to buy,  download and read a series of books,  magazines,  newspapers,  articles, etc. In 2007, Jeff Bezos upgraded it to different versions of Kindle. As a result, all the Kindle devices have access to Kindle Content digitally. There are about six billion e-books available on Kindle as of 2018.

As Amazon kept growing in 2013, it was recognized as the biggest shopping retailer in the world. After that, Jeff Bezos used to raise funds by selling some of Amazon’s shares to expand Amazon. With the fast growth of Amazon in 2017, Jeff Bezos became the wealthiest person in the world, with a net worth of over $90 Billion.

In February month of the year 2018, Amazon reported its highest ever quarterly profit of $ 2 billion. Later in the same year, on March 6, he was officially recognized as the wealthiest Person by Forbes with a net worth of $112 Million.

In the same year, he received the title of the wealthiest person, and many controversies followed him. The prices of his stocks came down, and many investigations took place regarding tax issues. Later after announcing the increment of the wages of employees working in Amazon, all the controversies seem to settle down.

Besides Amazon, Jeff Bezos keeps investing in other stocks and firms. He was the first shareholder in Google. He also has significant investments in healthcare companies such as Unity Biotechnology, Zocdoc, Juno therapeutics, GRAIL, etc. Jeff Bezos founded Blue Origin, a human spacelift startup, and Altos lab, a biotechnology company, to develop longevity therapeutics.

Jeff Bezos and His Recognition

In 1999 Jeff Bezos received his first major award from time as the person of the year. In 2012, He was named business person of the year by Fortune. In 2008, Carnegie Mellon University honored him with a Doctorate in Science and Technology. In 2018, the Explorers club awarded him with the Buzz Aldrich space exploration award for his work on Blue Origin. He received many more recognitions, such as being on this list of Influential persons, great leaders, etc.

From dreaming of getting all the people of the earth together and creating a huge National park to making it a reality, Jeff Bezos proved that nothing is impossible if you truly wish to achieve it. Today everyone is aware of Amazon owing to its marketing and its expansion. This all is possible just with the great thought and continuous hard work of Jeff Bezos. The success story of the great entrepreneur inspires us to dream, plan, work for it each day and achieve greatness in life.