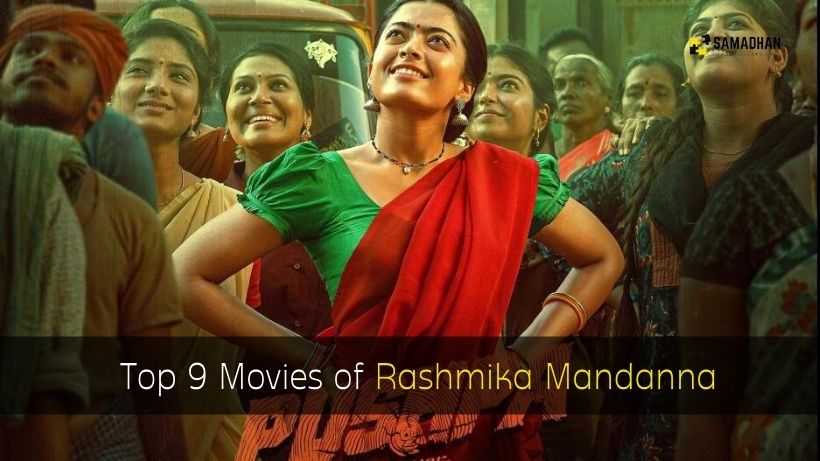 Rashmika Mandanna was born on 5 April 1996. She is an Indian actress and has worked in Kannada, Tamil and Telugu films. She has a large fan base across India and was awarded the title of ‘National Crush of India.

Here are the top 9 movies featuring Rashmika Mandanna (Srivalli in Pushpa) that you should definitely watch.

The Telugu action-drama movie Pushpa : The Rise has been receiving rave reviews for its captivating screenplay and outstanding performances by the actors. The film was full of drama, romance and action, with a touch of thrill that kept the audience engaged until the very end.

Many are looking forward to the sequel, Pushpa 2, The Rule. Rashmika Mandaana’s charmed performance is a key part of this.

Although the movie was mostly a one-man-show of Allu Arjun as Pushpa the title character, Rashmika did a remarkable job in her short time on-screen playing Srivalli, the simple, cheery, lady love of Pushpa.

Have you ever wondered who is the voice behind Allu Arjun’s character in Pushpa : The Rise movie in Hindi? Shreyas Talpade is the man behind Allu Arjun’s Hindi voice, he shared a video on Twitter featuring himself in studio while dubbing for the film. You can now watch Pushpa full movie in hindi at Amazon Prime & Netflix.

Kirik Party was Rashmika’s first acting role. It became the highest-grossing Kannada film of all time. Rashmika played the role of Saanvi in this film about college life and its mischiefs.

She was a bold, intelligent girl who was both moralistic and philosophical. We loved the way she played her role perfectly. She was able to easily slip into the character’s skin.

The Telugu film, which was released in 2018, was a commercial hit and received praise for its screenplay. Rashmika Mandanna is the leading role of Geetha. She is a prejudiced, witty, and no-nonsense girl.

This 2019 film was critically acclaimed and tells the story of a love story between Vijay Devarakonda (student union rebel) and Rashmika (girl chasing her dreams).

This role was a completely different one from her previous roles. For the role, she won the South Indian International Movie Critics Award.

Remake of the Tamil film Poojai in which Rashmika played Viraj’s love interest, Anjani Putra was portrayed by Puneeth Rajkumar. Many praised her performance as a “bratty” rich girl who undergoes a personality change and later wins an award for best actress.

The comedy-action movie, which revolves around an army major’s secret mission and the ensuing journey, was reportedly the 41st most-grossing movie of 2020. Rashmika was a co-star with Mahesh Babu and received praise for her charming portrayal.

The 2020 romantic-comedy film Bheeshma was a commercial success. It centers on a company’s new product, its CEO Bheeshma, and his attempts to save it from disaster with the help Chaitra, played Rashmika Manndanna. We were impressed by her performance as an ambitious, opinionated woman.

In 2018, Chalo was a romantic-comedy that was well received by audiences across India and abroad. The story follows the love story of an inter-caste couple, who try to convince their families to allow them to marry by breaking down cross-state animosity. Rashmika was one of the main characters in the film. She played Karthika, an engineering student who is simple and uncoordinated.

The romantic comedy Chamak was a love story about a misguided marriage and the subsequent hate-love story that ensued between the couple. It featured Rashmika (and Ganesh) in the leading roles. Rashmika was loved for her dual personalities in the film. She played both roles with perfect skill, as she was a coy, docile, traditional Indian girl as well as a wild, carefree, and free-spirited woman.

Mandanna has quickly become an actor to watch in a male-dominated industry.