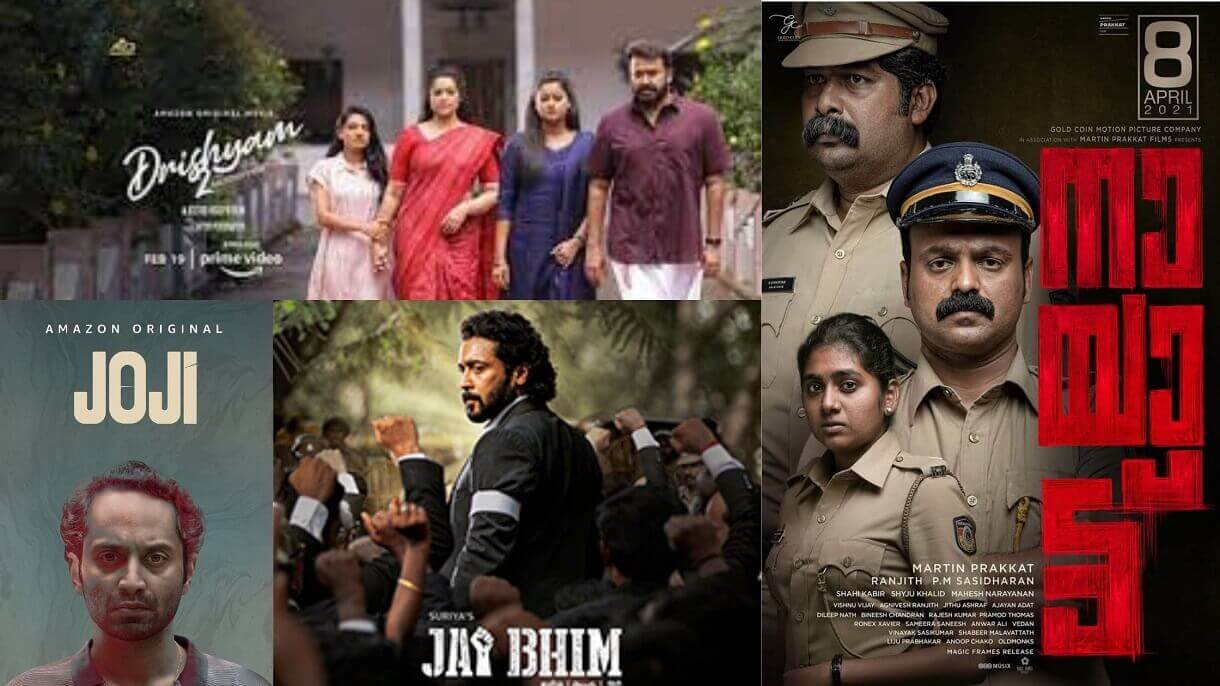 This year 2021 has been a great year for south cinemas. At all platforms From OTT to theatrical, we saw many best south movies 2021 in hindi that have undoubtedly become our favourites. Here are the top South movies of this year that we’re still thinking about, a lot.

Indian Tamil-language legal drama film released on Amazon Prime Video, directed by T. J. Gnanavel and produced by Jyothika and Suriya, A pregnant woman from a primitive tribal community, searches desperately for her husband, who is missing from police custody. A High Court advocate rises in support to find her husband and seek justice for them.

Indian political thriller film directed and co-produced by Martin Prakkat and written by Shahi Kabir. A political thriller starring Kunchako Boban, Joju George and Nimisha Sajayan, Nayattu tells the story of 3 cops who have been framed for murder. This film was shortlisted for India’s selection for the Best International film at the 94th Academy Awards.

Drishyam 2, is a 2021 Indian Malayalam-language drama thriller film written and directed by Jeethu Joseph, This Amazon Prime Video release was a successful second instalment of a brilliant first film. Starring Mohanlal, Meena Ansiba, Hassan and Esther Anil, this film follows the family as they find themselves in legal trouble, once again.

Thinkalazhcha Nishchayam is a 2021 Indian Malayalam-language, comedy drama film written and directed by Senna Hegde. This comedy drama revolves around a couple’s engagement party which doesn’t quite turn out the way it is supposed to. The film received the award for Best Story in 51st Kerala State Film Awards and premiered on SonyLIV.

Kurup is a 2021 Indian Malayalam-language crime thriller film written by K. S, Starring Dulquer Salman in the titular role along with Indrajith Sukumaran and Sobhita Dhulipala, this film follows the story of a wanted fugitive and was the highest grossing Malayalam film of 2021. Kurup is also the first Indian film to have non-fungible token (NFT) collectibles.

Malik is a 2021 Indian Malayalam-language political thriller film directed, written and edited by Mahesh Narayanan. Another Fahadh Faasil film we can’t get out of our mind, this political thriller that released on Amazon Prime Video told the story of a man who achieves cult-like status in his village.

The Great Indian Kitchen is a 2021 Indian Malayalam-language drama film written and directed by Jeo Baby. This critically acclaimed movie that won the Kerala State Film Award for Best Film for Best Screenplay and Best Sound Designer, tells the journey of a newly wed wife who can’t come to terms with being a submissive partner to her husband.

Kaanekkaane is a 2021 Indian Malayalam-language thriller drama film written by Bobby and Sanjay and directed by Manu Ashokan. This thriller drama revolves around a father who visits his son-in-law only to find something that changes their lives forever. The movie premiered on SonyLIV and was the first ever Malayalam film to do so.

Home is an Indian Malayalam-language comedy drama film directed and written by Rojin Thomas. This Amazon Prime Video comedy drama revolves around a middle-class family and their lives in a world full of technology.

How many movies of these have you watched?